Orchestra of the Hungarian State Opera

This opportunity to see and hear one of the world's most delightful opera stars is likely to be remembered as one of the highlights of the season. As one of the greatest performers of our time, Anna Netrebko literally has all the world's leading opera houses competing for her artistry. Of the many 'mosts' to her name, she is the first classical musician to find a place on Time magazine's top 100 most influential people. Her wonderful voice, infectious charisma and enchantingly suggestive p...resence on cinema screens, opera stages and in concert halls alike has now been blessing audiences with unforgettable experiences for close to two decades. This evening with the Russian-Austrian soprano, who is also a patron of several charitable organisations, will be all the more special as it is a co-production with the tenor Yusif Eyvazov, her Azerbaijani husband.
Mr. Eyvazov made a number of highly acclaimed debuts in leading opera houses during the 2015/16 season: Canio (Pagliacci) under Plácido Domingo at Los Angeles Opera, Calaf (Turandot) at the Metropolitan Opera in New York, at the Vienna State Opera, Manrico (Il trovatore) and Radames (Aida) at the Paris Opéra and Manrico under Barenboim at the Berlin State Opera. As a concert artist he has been heard in Graz and Italy and on an Asian tour with Anna Netrebko.
The couple declared their undying love in December 2015 before bringing the house down at this year's Salzburg Festival in the lead roles of a concert performance of Puccini's Manon Lescaut. Two years previously, it was this opera that had brought them together when they met during rehearsals.
The programme to be heard at the Béla Bartók National Concert Hall will include several Puccini gems alongside other masterpieces of opera verista. In addition to the irrepressible melodies of Boito, Cilea, Giordani, Leoncavallo, Mascagni and Ponchielli, the audience will also hear the Franz Lehár operette classic Dein ist mein ganzes Herz/Vágyom egy nő után from A mosoly országa in a version rearranged especially for the couple. The conductor's podium will be occupied by Jader Bignamini, who was discovered by the outstanding opera conductor Riccardo Chailly.

Anna Netrebko and Yusif Eyvazov will be available to sign CDs in the Glass Hall following the concert. The artists will sign CDs only and although photographs can be taken of them, they will not be posing for photographs with fans. The session will not last longer than 45 minutes, so we kindly ask you to prepare the cover of the CD you wish to have signed to allow as many people as possible to have their turn. 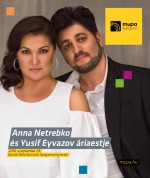