All the events of the Rising Stars programme showcase exclusively young artists, but their underly principle is variety. While the first concert this year in the series organised annually by the European Concert Hall Organisation (ECHO) offers us a chance to get to know a superb percussionist, the second concert on the opening day ventures into a fundamentally different world, that of a traditional string quartet - two violins, a viola and a cello - performing one repertoire piece from each of the the past three centuries, including our own.

And what did the four musicians who founded this string quartet in Frankfurt am Main in 2019 have in mind when they named the ensemble? What could 'Aris' mean? The answer has nothing to do with art history, mythology or history: the meaningless word is a composite of the final letters of the first names of the members. The four young musicians studied in Madrid with Günter Pichler, former primarius of the Alban Berg Quartet, and later attracted a great deal of attention with several victor...ies at international competitions, including the extremely prestigious ARD competition in Munich where they collected a stunning total of five awards. They have also recorded two albums, with the music of Schubert and Shostakovich featured on the first and that of Brahms on the second. At their Rising Stars concert, they will perform, along with Mendelssohn's Romantic masterpiece, a work by a relatively rarely heard Czech composer, Erwin Schulhoff, who will represent the 20th century. Misato Mochizuki, the composer of the new work commissioned by ECHO, was born in 1969 and alternates between working in Europe, North America and Japan.

Tickets will go on sale at a later date, please keep an eye on our website or register for our newsletter for further details. 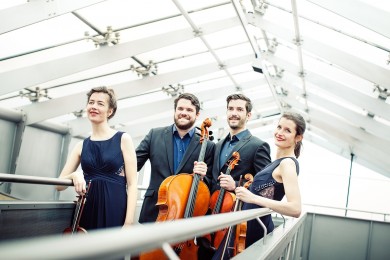