Who has the most expansive coloratura? Who has the greatest vocal range, who can sing the most notes in one breath, and who can sing the highest and the lowest notes? Who is the fastest? Such contests are not the exclusive privilege of sportspeople, as from time to time instrumentalists or singers have also been known to get into the ring together. The winner is always the same: the audience. This noble tradition is revived here at this concert, evoking the rivalry of two 18th century supe...rstars, Faustina Bordoni and Francesca Cuzzoni, whose virtuoso wizardry inspired many composers to write arias some thought impossible to sing.
This evening the two living greats of the style take to the stage: Simone Kermes perfected her skills in Germany, while Vivica Genaux began her journey of global conquest somewhat farther afield in Alaska. The performing style of both these artists is characterised by a captivating and passionate, almost demonic power, naturally alloyed to flawless intonation and sweepingly energetic tempo. For them nothing is impossible, and in reality what they accomplish with their voices on stage might be regarded as athletic feats. It is rare that we have the opportunity to hear the passionate arias and duets of Baroque and pre-Classical composers performed by such a matchless pairing. And as if this were not enough, instrumental accompaniment will be provided by the ensemble founded by the noted cellist Sol Gabetta and her brother, which specialises in the music of the period and performs on authentic instruments. 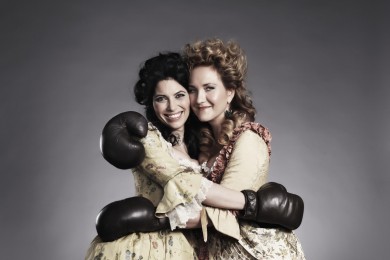