It is strange to think that there is a work by Georg Friedrich Handel - and a major one at that - which has not yet been performed in any Hungarian concert hall. Those with a sense of of how unfathomably rich the composer's yield of oratorios is, however, might not find this so suprising.

So who are these Seleucids? They were the inhabitants of an ancient empire that comprised a significant portion of the parts of Asia conquered by Alexander the Great: Syria, Mesopotamia, the Persian Empire and Asia Minor. One of the rulers of the Seleucid Empire was Alexander Balus, who reigned between 150 and 145 BC. In the summer of 1747, the 62-year-old Handel wrote a three-act oratorio about the emperor's life titled Alexander Balus, set to a libretto by Thomas Morell, which would firs...t be shown in London in March of 1748 Morell -who also wrote the text for two other of Handel's oratorios, including Judas Maccabeus -used the biblical book I Maccabees as his source. Briefly summarised, the themes of the tragically ending oratorio are love, treachery and violent struggles.
The ensemble playing the work, the Savaria Baroque Orchestra, was founded by flutist and conductor Pál Németh, one of the pioneers of performing historically informed early music in Hungary, with the aim of presenting music from the 17th and 18th centuries. Apart from her performances with the Budapest Chamber Opera, the mezzo-soprano singing the title role, Kornélia Bakos, has also appeared in productions of the Budapest Wagner Days festival. Singing the part of Cleopatra, Krisztina Jónás regularly sings in contemporary concerts, along with performances of the Baroque repertoire.

The concert will be preceded, at 5.30 pm, by an introductory presentation by János Mácsai entitled Prelude in the Auditorium, which will be open to anyone holding a ticket for the performance. 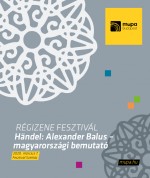