When an artist earns a position that is important to him, he tries to show what he can do. This is what the 32-year-old Joseph Haydn did in 1766, when following the death of his predecessor, Gregor Joseph Werner, he assumed the post of kapellmeister for the Esterházy family - gaining full responsibility after working for five years under Werner as second conductor since 1761. Now with sole authority, official and otherwise, over musical life in the prince's residence, he set to work on the most expansive mass composition of his life, which posterity commonly knows as the 'Cäcilienmesse', or in English the 'Cecilia Mass'.

Although this is how the piece, which was eventually only completed in 1773, remained in the world's memory, this is not its actual name: the original manuscript bears the inscription 'Missa Cellensis in honorem Beatissimae Virginis Mariae', meaning that the mass can be linked to the cult of Mary at the Mariazell pilgrimage site in Styria. Some have conjectured that the name Cecilia Mass could be related to the possibility that the mass may have been performed once at a ceremony of Vienna's Soci...ety of Saint Cecilia. It was only in the 19th century when the title became stuck to the work. This 65-minute composition that pushes liturgical boundaries presents numerous extremely exacting contrapuntally developed parts and vocal solos that are positively operatic in terms of the demands they place on the singers. The work belongs to the cantata mass category of large scale high mass compositions (a group that also includes Bach's mass in B minor and Mozart's in C minor. This extraordinarily significant composition has long been a part of the repertoires of two of Hungary's outstandingly important workshops of historically informed performance: the Purcell Choir, founded in 1990, and the Orfeo Orchestra, which came into existence a year later. Their leader, György Vashegyi, himself conducted the Cecilia Mass at the helm of the two ensembles many years ago, to tremendous acclaim. The concert also offers another exciting discovery, as alongside the work by Haydn - or more precisely, between its two movements - we'll hear a Salve Regina (in C minor) written by Werner, his aforementioned predecessor, in 1762.

program change Tickets
The discounts of the Müpa+ membership programme will be applied for this performance, and we also credit double membership points. 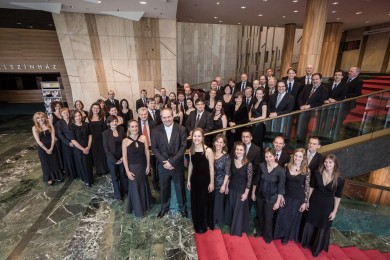