The Énekel az ország (Let the country sing) initiative has its origins in a joint concert of Budapest secondary school students, a project launched in 1986 which grew into a nationwide event. In essence, the series provides an opportunity for amateur music-lovers and choral singers to come together in a monumental ensemble to perform some of the most powerful and largest-scale works in the choral music repertoire. Celebrating its 30th anniversary this year, the series welcomes this milesto...ne by expanding even further, as foreign ensembles join the assembled throng of Hungarian choral singers. Based on preliminary registrations, the number of participants will exceed 1,000, so that - in order for everyone to get a chance to appear on stage - the concert will feature twice on the festival programme.
On two occasions, on 24 and 25 May, choral singers from home and abroad perform Carmina Burana, the work which began this tradition, as well as Roland Szentpáli's jazz-styled Magnificat, with the cooperation of the Dohnányi Orchestra Budafok. Conductor for the evening is Gábor Hollerung, who has gained worldwide recognition for his large-scale choral projects and concerts involving choirs from a variety of cultures and nations. 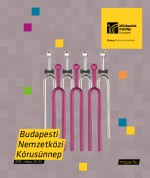