Every year the European Concert Hall Organisation helps outstanding talents to show off their skills on the stages of Europe's prestigious concert venues, making them known to thousands of music-lovers across the continent. This evening promises to be exceptionally rich, with four fabulously talented youngsters taking to the stage to perform a selection of both popular and unusual vocal and chamber orchestra pieces.
Omo Bello left behind studies in cellular biology to become a profession...al singer. Born in Nigeria and living in France, she has been helped with valuable advice by the likes of Teresa Berganza and Grace Bumbry. She brings with her a very special programme of songs by popular bel canto opera composers that would be remarkable even for an established artist. Her partner on piano is Clément Mao-Takacs, who also uses his Hungarian name in accordance with family tradition - his great grandmother emigrated to France in the early 20th century. The 35-year-old pianist, conductor and composer maintains a fascination with Hungarian literature, cuisine, wine and art.
Performing in the second half of the concert, Michael Petrov was born in Bulgaria in 1990, studying at the cellist's Mecca of the Kronberg Academy. He has also attended several other prestigious schools, participated in workshops and performed in countless venues and appeared with highly regarded ensembles. He will be accompanied on piano by Britain's Ashley Fripp, another alumnus of the Guildhall School of Music for whom international fame beckons. 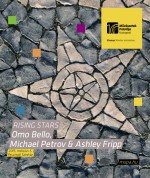