The extraordinary Russian pianist - who, as Artist of the Season, will play three times at Müpa Budapest in the 2018-19 season - most often performs in programmes consisting of works by composers from his homeland. At this solo recital, he won't be disloyal to the Russian repertoire, but we will also encounter two Beethoven sonatas.

Born in Irkutsk, the 43-year-old piano phenomenon is known to the world as a versatile musician, but Denis Matsuev is primarily dedicated to the Romantic composers. However, two works from Beethoven will now occupy the first half of the recital. But not just any two works! The Sonata in D minor (op. 31) is not referred to as The Tempest by chance: the tragic power of the opening movement and the raging spiritual state of the finale truly justify its name. But The Tempest was not named as s...uch by Beethoven, nor does it refer to the natural phenomenon, but rather to Shakespeare's drama. In any event, this work was a movement toward 19th century Romanticism, much like the Sonata in A-flat major (op. 110), which pushed its own boundaries with its mode of expression and the exploration of forms and genres typical of late Beethoven.
In the recital's second half, Matsuev will demonstrate his devotion to the 19th century and fin de siècle repertoire, guiding us into a world all his own as an interpreter of the works of Russian composers. Rachmaninoff's prelude and étude are pieces of sophisticated, highly technical and poetic music - yet remain expressions of a special aristocratic outlook. Tchaikovsky, on the other hand, offers a rare glimpse of himself in his sonatas, especially in this barely played peculiarity: the ('Great') Sonata in G major appears once in a blue moon in piano recitals - it's worth taking advantage of the opportunity to hear in Matsuev's interpretation.
In looking at the entire programme, and taking into account Matsuev's skill on the piano and his monumentally evocative personality, we can be assured of a very special experience on this evening. 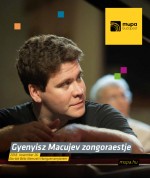