La bohème, Tosca, Madama Butterfly: the world knows Puccini from his most popular operas. On this evening we can see and hear two true rarities from his workshop, one instrumental work and one vocal, both of which are early compositions that represent the years before his great success.

Success did not come easily for Giacomo Puccini (1858-1924), who as a young man had to struggle for recognition. He submitted his first opera, Le Villi (The Fairies), to an 1883 contest held by the Sonzogno publishing house, but the jury took no note of it. That the opera was staged a year later and was a success with audiences thanks to the support of Puccini's older colleague, Arrigo Boito. The piece is a romantic fantasy in which a young fiancée, seduced into infidelity by a siren, is m...ade to dance himself to death by vengeful fairies.
In 1890, some years after Le Villi but still before his defining successes, Puccini composed a string quartet elegy called Crisantemi. An orchestral version of the piece is often peformed as well, which is how we will hear it.
On this evening, the two works together will show the young Puccini: Crisantemi as a ballet with the choreography of Balázs Vincze, and performances by the artists of Ballet Pécs and a leading role from Carlo Ventre. The pieces will be conducted by an expert on Puccini and the Veristas, Alberto Veronesi of Milan. The semi-staged performance will be directed by Csaba Káel.

The performance is a co-production presented by Müpa Budapest, the Pannon Philharmonic, Ballet Pécs and Zsolnay Örökségkezelő Nonprofit Kft. 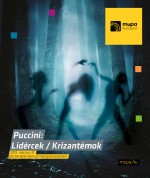