Three of the greatest masterpieces from the literature for the cello will be played on this evening, along with a 'special guest' - a masterpiece of similar weight from the solo violin repertoire - transcribed for cello. Bach's cello suites were ignored for two entire centuries, until Pablo Casals recorded them and gave them a breakthrough in their public estimation. The instrument has no less to thank Beethoven's cello sonatas for than the emancipation of chamber music, while Schubert's ...Arpeggione Sonata - originally written for a six-string instrument equipped with frets and resembling a guitar - already points the way toward Romanticism.
Ditta Rohmann was born in Budapest 1983. After spending two years studying at the New England Conservatory in Boston in the early '90s, she enrolled at Budapest's Franz Liszt Academy of Music in 1995, where she spent the next ten years studing under Ottó Kertész and Miklós Perényi. Later on, in 2007/08, she also attended Ivan Monighetti's classes at the City of Basel Music Academy. She is considered to be an experimentative individual, an enthusiastic chamber musician and a sensitive and creative artist. She herself said of her partner, Olga Pashchenko, that she is 'a fantastic keyboard virtuoso and an elemental talent. She is very self-confident and possesses enormous skill and experience, even though we are the same age. It is very inspiring to play music with her.' 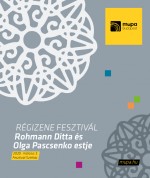