Pronounced "unrivalled” by the Viennese daily Kurier, Dorottya Láng has won herself international acclaim with talent that classical music news agency Musik Heute once termed both "enchanting” and "impeccable”. Shortly after earning her degree from Vienna's Universität für Musik und Darstellende Kunst, the Budapest-born mezzo-soprano quickly achieved outstanding results in prestigious competitions, including taking top prize at the Emmerich Smola Competition in 2012. A member of the Vienna... Volksoper between 2012 and 2014, and of Nationaltheater Mannheim during the 2014/15 season, she has as of the 2015/16 season been contracted with the Staatsoper Hamburg, where she made her début in the title role of Daphne, and has also portrayed Varvara (Káťa Kabanová), Dorabella (Così fan tutte), Flora (La traviata), Cherubino (Le nozze di Figaro) and Hänsel (Hänsel und Gretel). She has also made guest appearances at such venues as the RuhrTriennale and the Malmö Opera, and has given song recitals and concerts at Vienna's Konzerthaus and Musikverein, among other venues. In addition, she is a recurring guest at the Oxford Lieder Festival.
The 2016/17 season sees her singing both the title role of La Cenerentola and the part of Hermia (in A Midsummer Night's Dream) at her home theatre. Elsewhere during the season, she will appear at Hamburg's Elbphilharmonie in a production of Mahler's Symphony No. 8 conducted by Kent Nagano, make her début with the Tonkünstler Orchestra in Beethoven's Ninth Symphony, and also will be appearing for the first time at the Schubertiade Festival in the Austrian town of Hohenems. Her partner at her song recital there, as he will be at Müpa Budapest a few months later, will be one of the most sought-after piano accompanists of our time: Helmut Deutsch. 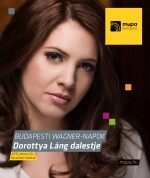