A multi-faceted artist such as Teodor Currentzis, who is at once conductor, composer, instrumentalist and actor, is always exciting and attractive to the audience. Even more so when his life has followed an unusual path, from his birthplace of Athens, to the completion of his studies in Saint Petersburg, to the launch of his career in Siberia.

Born in 1972, Currentzis began his career at the head of the Novosibirsk Opera and Ballet Theatre, establishing a complex musical workshop where he initially created a symphony orchestra under the name musicAeterna of Perm Opera in 2004, quickly followed by a chorus of the same name. It was as music director of the latter that he took over as director of the opera house in the city of Perm in the Urals, while today he leads the orchestra of Southwest German Radio.
Currentzis has remained ...faithful to the musical ensembles he founded, however, continuing to work regularly as head of musicAeterna of Perm Opera, which has toured extensively in Russia and Western Europe, appeared as a guest at international festivals, and made successful recordings of masterpieces of the symphonic repertoire and operas alike. In terms of style, the ensemble is omnivorous, performing a wide variety of music from Baroque works to commissioned contemporary pieces. The programme for this concert at Müpa Budapest is more homogeneous, featuring two masterpieces by Mahler from the early creative period of his career representative of the so-called Wunderhorn Romanticism. At this time, Mahler's imagination was vividly inspired by Des Knaben Wunderhorn (The Boys' Magic Horn), the renowned collection of folk poems published by Clemens Brentano and Achim von Arnim from 1805 to 1808, from which the song cycle and closing solo soprano movement of the Symphony No. 4 to be heard at this concert were drawn. 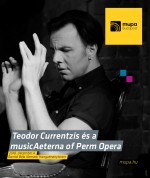