In the Ring Cycle, which holds a resonance for the fate of man today, the curse of the gold with power over all destroys the old order of the world. Wagner places hope for the advent of a just new present beyond wars and destruction in Siegfried, the fearless hero unrestrained by any law, and Brünnhilde, who embodies the power of love in contrast to the counter-example of a society steeped in egotistic folly. However, only the fall of the lovers can create a new reality from a disordered a...nd decayed world, and not even the entreaties of the proud Valkyries can help change this.
In the second episode of the tetralogy, Christian Franz plays Siegmund, while the part of Hunding is sung by Walter Fink, a recognised Wagner specialist for more than three decades. Iréne Theorin, a one-time pupil of Birgit Nilsson, is one of the most sought-after interpreters of the role of Brünnhilde today. Having sung the entire Ring Cycle at the Royal Danish Opera in Copenhagen in 2006, she went on to captivate audiences in the role in Washington and at New York's Metropolitan Opera. 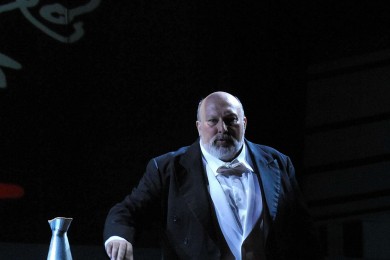