the dancers and musicians of the Hungarian State Folk Ensemble

The Délvidék (the southern territories of the former Kingdom of Hungary) not only represents the unique national, historical and cultural diversity of the Carpathian Basin, but can also be considered as something of a curiosity among the many nations of Europe. Peoples have come and gone, they have settled and been driven away, and fate has not always been kind to this landscape, yet the down-to-earth people that live here have always remained good friends with their neighbours. This is reflected in a new production from the Hungarian State Folk Ensemble.

For the first time in the history of Hungarian folk dance theatre, this performance will present the people who live in the Délvidék region, comprising Hungarians, Serbs, Croats, Ruthenians, Slovaks, Romanians and Gypsies. The Délvidék contains a wide range of dance and musical traditions and preserves the special characteristics of Central European and Balkan cultures, which have had a particularly strong influence on each other in this region.
Water is a major dramatic theme in this prod...uction, encompassing the Tisza, Drava, Sava, Mureș, and Mur rivers and all the bubbling streams and rivers that flow in one direction to eventually unite in the River Danube. The rich symbolism of water - as the source of life, an instrument of purification and an element of rebirth - is something every culture makes its own. With this richness of content, throughout the performance - across changing time periods - we will enjoy a presentation of the specific dance and musical cultures of the individual regions. The stage design will conjure up a succession of continuously changing images, alongside animation, projections and shadow play. The original costumes will also form a vital part of the spectacle, displaying the regional differences of the different groups of peoples. 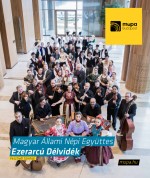