The production My Land from the internationally renowned contemporary circus company Recirquel premièred in August 2018 at one of the world's most prestigious arts festivals, the Edinburgh Festival Fringe, where critics rated it the best of several thousand productions. This show directed by Bence Vági focuses on the roots of humanity and the eternal connection between a person and their homeland, depicting it in a space filled with illusions. While the production is the consummation of ci...rque danse, a new form of performance art, it is not only in terms of genre that it can be considered unique: this is Recirquel's first piece to feature only guest artists from outside Hungary. Vági invited seven Ukrainian acrobats, each of them outstanding practitioners of their particular circus skills even by international standards, and explored their personal life stories - of tradition, freedom and love - to create the production.

The première was an event of the CAFe Budapest Contemporary Arts Festival is presented by Müpa Budapest. 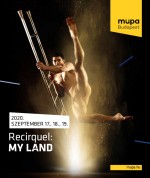