"The clown was always the caricature of a well-established, ordered, peaceful society. But today all is temporary, disordered and grotesque. Who can still laugh at clowns? Hippies, politicians, the man in the street, all the world plays the clown now. What, then, should we do today with the little red-nosed fellow at the centre of the ring?” It is as if in answer to the question posed by Federico Fellini in the 1970s that Recirquel, Hungary's first contemporary circus company, offers The N...aked Clown, its second production for the Festival Theatre at the Palace of Arts.
Let's not be afraid to admit it: all of us harbour one, or rather many images of clowns, from the foolish, stumbling character to the crafty prankster and many different points in between. Director-choreographer Bence Vági and his regular creative partners, together with his team of outstanding young circus performers, looked extensively at the evolution of the mediaeval court jester into the popular figure from the circus arena.
The creators were primarily interested in what lies behind the clown's perpetually smiling, painted mask. In this production, the disguise is removed both literally and figuratively as the performers invite the audience on an unusual inner journey into imaginary realms, where the layers covering and protecting reality disappear. Our fellow travellers and guides in this spectacular, large-scale production, accompanied and expanded with live music and dancers, are the young artistes of Recirquel. After several months of painstaking preparation, they are ready to dazzle fans both old and new with a bag of breathtaking new tricks never witnessed before in Hungary.

A production realized under the aegis of the Budapest Spring Festival. 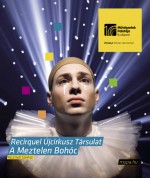