There is something truly magical about theatre. Stories are brought to life before our eyes through the acting on stage, the scenery and the costumes. This is doubly true for musical drama, as the performers on stage sing their lines, while their personalities and the situations they find themselves in are depicted through the unique means of music. The Opera Workshop performances provide a taste of this genre for 8- to 14-year-olds.

György Ránki adapted Hans Christian Andersen's beloved fairy tale The Emperor's New Clothes with the help of poet and lyricist Amy Károlyi. The story contains eternal wisdom: hypocrisy and fear are deadly poisons, and it is often children who are most likely to utter the truth. In this case, the truth is the fact that the king marching before his people in his 'new clothes', woven by the miracle-weavers, is in fact wearing nothing at all! Tyrants should tremble at the power of laughter: Ki...ng Pomádé is ultimately swept from power by the guffaws of the people.
György Ránki, who demonstrated his outstanding sense of humour in other compositions as well, wrote this delightful children's opera to the ingenious libretto by Amy Károlyi. As a one-time student of Zoltán Kodály's, the composer freely used Hungarian folk songs as well as elements from pop and jazz music to form his colourful, eclectic style, an entertaining blend which captivates listeners with its virtuosity and gracefulness.
Not only is King Pomádé's New Clothes full of catchy music, it is also a riveting drama. This is something the audience of 8- to 14-year-olds is sure to be convinced of during the Opera Workshop series with the help of the production's director Attila Toronykőy, the cast of singers and the Discantus Choral Group, the Sinfonietta Erudita and conductor Péter Oberfrank.

Presented by arrangement with the UMPA. 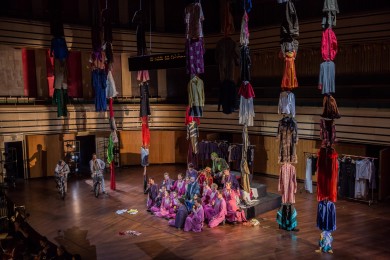