Can music paint pictures? We believe it can. And what a variety of characters, situations, and moods! Rachmaninoff's Piano Concerto No. 3 lays the turmoil of a heart in love all but bare before us, while the Symphony No. 10 by Shostakovich sculpts the monster that was Stalin. These two works meet at this evening's concert.

The composer of the piece entitled Prières nocturnes that will open the concert is Ádám Brandenburg, who was awarded the Müpa Budapest special award at the New Hungarian Music Forum Composer Competition organised as part of the 2017 CAFe Budapest festival.
Born in 1979, Ádám Cser studied at the Liszt Academy of Music in Budapest under András Ligeti and Tamás Gál. In 2010, he graduated with honours, and in the same academic year became an Erasmus scholar at the Vienna Music Academy under Pr...ofessor Mark Stringer. He participated in master classes given by Zoltán Peskó and Péter Eötvös, Bernard Haitink and Jorma Panula. He was the founder, and then artistic director, of the Victoria Chamber Choir in Szeged, with which he achieved numerous international successes. He is also active as a composer, and serves as the music director of the National Theatre of Miskolc.
The soloist for the concert, Martín García García, was born in 1996 in the town of Gijón in Asturias, northwest Spain. He began playing piano at the age of five, and within a few years had already achieved extraordinary results. He began his studies at the Queen Sofía College of Music in Madrid in 2011, as a pupil of Galina Eguiazarova.
The Miskolc Symphony Orchestra was formed as the city's professional ensemble in 1963. With its development having been guided by Péter Mura, László Kovács and, later on, Tamás Gál, it is currently under the leadership of Mátyás Antal. 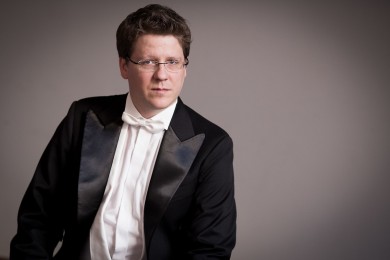 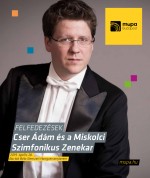