Advent - as the meaning of the word alerts us - is a time of joyful waiting. This is done most harmonically when we await the holiday not alone, but as part of a community. This is perhaps one of the reasons why choral singing has become such an inseparable part of Advent concerts.

Both as people and in terms of their career paths, the performers in the concert all symbolise something about how the Christmas holiday expands our thinking. One of the most important Hungarian custodians of the Kodály concept of music, the Cantemus Choir, has created a self-contained multi-generational community in which music is both an end and a means for elevating and ennobling the spirit. This is the aim that the two choirmasters, the father-and-son team of Dénes Szabó and Soma Szabó..., work toward in leading a family of choirs whose members have achieved countless successes over the decades, both in Hungary and abroad.
The Franz Liszt Chamber Orchestra embodies the idea of rebirth and transfiguration on the night before the holiday as, under the leadership of Péter Tfirst, the rejuvenated ensemble has continued the traditions of its original founders and renewed the playing style of Hungary's storied chamber orchestra. Also filling the walls of the Béla Bartók National Concert Hall with this wonderful Christmas spirit will be two vocal soloists, Eszter Zemlényi and Eszter Balogh, as well as the world-renowned trumpeter Tamás Pálfalvi, with his metallic yet still shiny sound, with loftiness being provided by the likewise internationally esteemed virtuoso organist László Fassang, while the intimate harp playing of Andrea Vigh, who also requires no introduction, will instil it with a sense of cosiness.
The Advent and Christmas choral works, as well as compositions by Vivaldi, Bach and Handel, are the worthiest way to relay the world of thoughts and emotions surrounding the holiday. 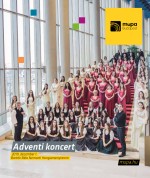