A storied world-famous Estonian choir led by an internationally acclaimed choirmaster will be presenting a special concert in honour of the upcoming Christmas holiday: we will hear works primarily by Baltic and Nordic composers, with a focus on Arvo Pärt, whose music is performed more than that of any of his contemporaries. Naturally, this performance of the Estonian Philharmonic's choir, conducted by Tõnu Kaljuste will feature pieces that are thematically suited to the holiday spirit. With one selection, the choir and their organist for the concert, Kadri Toomoja, will pay tribute to Zoltán Kodály.

Despite only having a population of just over 1.3 million, Estonia is a musical powerhouse: it has given the world an army of significant musicians in recent decades. Best known amongst them is 86-year-old Arvo Pärt, the most played contemporary composer of our time, a proponent of the "tintinnabuli” style and mystical minimalism. Representing Estonian music at the concert along with him at the concert will be Cyrillus Kreek, who, however, was born in the 19th century, in the late 1880s. T...his colourful programme also features Finnish choral music produced by the great late-Romantic Jean Sibelius and, 20 years his younger, Armas Maasalo, as well as Norwegian music by Knut Nystedt (1915-2014), who lived for nearly a century. It is full of curiosities waiting to be discovered, such as Kodály's rarely performed Laudes Organi, written for choir and organ, which was added as a tribute to this musical genius of the host country, a great innovator of the choral repertoire. Choirmaster Tõnu Kaljuste, who founded the Estonian Philharmonic Chamber Choir in 1981, is an avid promoter of contemporary music. The young organist Kadri Toomoja studied in her homeland and at the Sibelius Academy in Helsinki, and partners with the choir regularly.

The concert will be preceded from 6.30 pm by a conversation entitled Prologue, where ticket holders will be invited to get to know the performing musician and the works to be performed more closely.
The host of the discussion Szilvia Becze. 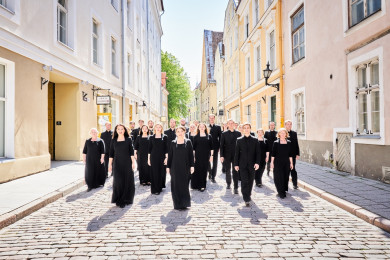 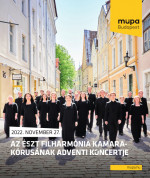