Last sonatas, the Ninth Symphony, The Art of the Fugue, Vier letze Lieder, Piano Concerto No. 3, the Requiem: - the unsurpassable "final” masterpieces of the music literature. This opus ultimuma of the giant composer Claudio Monteverdi, who died at the - by the standards of the time - venerable age of 76, is both such a testament and one of his largest-scale undertakings, which in spite of its significance is only rarely heard in concert halls. Written for alternating groups of voices and ...instruments and containing religious and liturgical works in Italian and Latin, the pieces of Selva morale e spirituale are being performed by one of Austria's leading early music ensembles. Formed in 1999, Bach Consort Wien, is not only an authentic interpreter of the works of Bach, it has also presented numerous forgotten pieces all over the world under the baton of its well-known artistic director, Rubén Dubrovsky. The ensemble is a frequent guest at prestigious festivals and regularly appears with world-renowned soloists, and this time will be no exception.
American Joel Frederiksen is one of the best known basses in the world of early music. Although the career of German Hanna Herfurtner took off only recently, the superb soprano has already appeared at the Salzburg Festival. Brussels-born Soetkin Elbers has not infrequently employed authentic Baroque gestures in her productions, and Polish tenor Jan Petryka has already appeared at the Aix-en-Provence Festival and at the Styriarte music festival associated with Nikolaus Harnoncourt. With fantastic voice and the talent and sensitivity for creating a mood that is crucial for this music, Dutch-born Oscar Verhaar has also crept his way into the hearts of the European audience.

A rough Hungarian translation, created by Éva Lax and Balázs Déri, of the works being played will be projected at the concert. 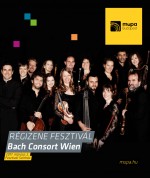