In centuries past organists were not only performers but composers too, since in fulfilling their service to the church they would be called upon to create liturgical works for ecclesiastical holidays. Among modern players of the instrument, many preserve the tradition of composition as part of their activities. Resident in Germany, Hungarian-born organist Zsigmond Szathmáry counts among these, an acknowledged master of his instrument who is both an authentic interpreter of the modern repertoire and a contemporary artist in his own right, his thinking as a composer inspired by personalities such as Pousseur, Stockhausen and Ligeti.

Born in Hódmezővásárhely in 1939, Zsigmond Szathmáry completed his studies at the Liszt Academy of Music in Budapest as a student of Ferenc Szabó (composition) and Ferenc Gergely (organ), before perfecting his skills in postgraduate training first in Vienna in 1963, and from 1964 in Cologne and Darmstadt. His teachers included Alois Forer and Helmut Walcha. He worked as a Kantor in Hamburg-Wellingsbüttel and at Bremen Cathedral, and from 1972 taught at the conservatories of Lübeck, Bremen ...and Hannover. In 1978, he accepted a professorship at the Hochschule für Musik Freiburg. Besides guest teaching posts in Tokyo and Seoul, he has taught courses in Haarlem, Darmstadt, and numerous conservatories and universities in Europe, North America, Japan and South Korea. Szathmáry has also attained international recognition as a conductor. He has premièred numerous contemporary works, in collaboration with composers including Heinz Holliger, Wolfgang Rihm, Luciano Berio and Mauricio Kagel. This concert in Budapest, featuring two requiems - performed by outstanding musicians - is governed by the notions of honour and commemoration. 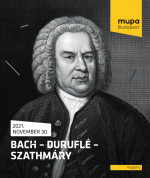