Along with two of Bach's Brandenburg concertos and excerpts from the Musikalisches Opfer, the Kossuth Prize-winning violinist and his friends will play a violin concerto by Jean-Marie Leclair, considered the founder of the French violin school, and Haydn's double concerto - the latter with distinguished early music expert Miklós Spányi.

Johann Sebastian Bach compiled his collection of six works for Margrave Christian Ludwig of Brandenburg, sending the volume, bound in ornate leather, to him from Köthen in 1721, along with a dedication penned in spidery script. The third piece in the series is thought to be the first to be completed, since it employed a concept of the concerto that was by then already considered outdated, with none of the ten string players taking on a leading soloist's role. The sixth concerto is also sco...red solely for strings, including two viola de braccios and two viola da gambas, both used today for all intents and purposes only in historical performances. Bach created these concertos during his years working as a kapellmeister in Köthen.
The Musikalisches Opfer came into being when Bach had to show proof of his improvisational skills and knowledge of counterpoint to the Prussian king Frederick the Great, a superb musician himself. This led to a majestic composition composed of two fugues (ricercars), ten canons and one four-movement trio sonata.
Jean-Marie Leclair was a Baroque violinist and composer whom posterity has recorded as an innovator in both areas. He wrote his six violin concertos, together listed under opus 10, around 1740, during a period of his life when he was employed by Princess Anne of Orange - a former student of Handel's. The last piece in the set is the Concerto in G minor. One distinctive feature of Leclair's work is how easily he incorporated every European style of the time into his works.
Before entering the services of the Esterházy princes, Haydn wrote several works for harpsichord and organ, furnishing these with simple string orchestral accompaniment. The composer fit his Double Concerto in F major, which he was particularly fond of in his later years and whose massive scale allowed for yet another cadenza in the second movement, alongside his Keyboard Concerto in C major, which dates back to 1756 and the occasion of his future sister-in-law Therese Keller's taking her vows to join the Order of Saint Clare.
The concert also gives Kelemen an opportunity to present his recently acquired Baroque violin, made by Januarius Gaglaino in 1771. 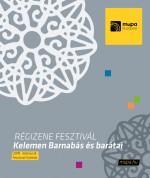