Every year since 2008, the Budapest Festival Orchestra and Müpa Budapest have put on an all-day marathon production presenting the very best work of a given composer, with a series of consecutive concerts from morning until late evening at the Béla Bartók National Concert Hall and the Festival Theatre. After marathons centred on Tchaikovsky, Dvořák, Beethoven, Schubert, Mozart, Bartók, Bach, Stravinsky, Mendelssohn and Schumann, Brahms, Bernstein and the music of America, Debussy and Ravel..., and then Beethoven again, and with the Liszt and Berlioz marathon held online owing to the coronavirus, this season the spotlight will focus on Richard Strauss. The German composer's long and remarkable career spanned from the second half of the 19th century to the middle of the 20th, and he impacted the development of modern music, including the early efforts of Béla Bartók, with both his operas and symphonic poems. The list of performers will once again consist of outstanding soloists, chamber ensembles and orchestras from the Hungarian music scene. In addition, students from the Liszt Academy are looking forward to welcoming visitors to their free concerts in the Glass Hall, while a memorable performance will be shown on the screen in the Auditorium. 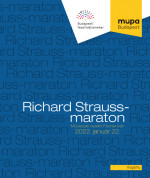