For today's music listeners, Luigi Cherubini is just a name, and most of them are not even aware that the composer, although he studied in his native Italy, exerted his greatest influence on the French music world. György Vashegyi and his two ensembles, the Purcell Choir and the Orfeo Orchestra - in tandem with an international cast of soloists - will now be presenting one of the composer's major operas, 209 years after its Paris world première. The theme, like in so many other operas, is conflict in love and politics.

The plot of the three-act Les Abencérages features a love story unfolding against a historical background. The setting is the Kingdom of Granada in the 15th century, and the storyline will remind most opera-goers of the central conflict in Romeo and Juliet, as this one is also about strife between two families - the Abencerrage and Zegri dynasties - at odds with each other, and naturally at the core of the conflict is the fact that the two lovers, Almanzor and Noraïme, come from the differ...ent opposing families. The work was first presented on 6 April 1813, at the Paris Opera, with Napoleon and his wife, the Empress Marie Louise, both present in the auditorium. Although Les Abencérages found immediate success, its popularity began to decline not long after Napoleon's downfall. This performance of Müpa Budapest's Early Music Festival will bring mostly star foreign singers to the stage, with soprano Anaïs Constans, born in the south of France, and Lithuanian tenor Edgaras Montvidas in the leading roles. György Vashegyi, the conductor of the production, has done a tremendous amount to acquaint Hungarian audiences with forgotten treasures of early music, with the French repertoire being particularly close to his heart. The Purcell Choir was established in 1990, followed by the Orfeo Orchestra a year later. Since then, the pair of ensembles have been the two most important early music workshops in Hungary.

The performance is a co-production of Müpa Budapest, Palazzetto Bru Zane and Orfeo Music Foundation with the support of Haydneum - Hungarian Centre for Early Music.

The concert will be preceded, at 6 pm, by an introductory presentation by Alexandre Dratwicki entitled Prelude in the Glass Hall (in French with Hungarian interpretation). The program will be open to anyone holding a ticket for the performance, but subject to prior registration on our website. 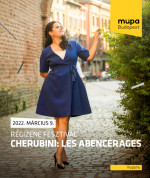