One of the leading conductors of our era, an orchestra with several centuries of tradition behind it, and two world-class singers - as well as a programme that will bring pleasure to both aficionados of hits from the Romantic era and those looking to get to know exciting rarities: this is what's on offer at this concert by the Staatskapelle Dresden as they perform Mendelssohn's Scottish Symphony and Alexander von Zemlinsky's Lyric Symphony under the baton of Christian Thielemann. We will also get to enjoy the voices of two wonderful vocal soloists: Julia Kleiter and Adrian Eröd.

Associated with the history of the Staatskapelle Dresden are names like Heinrich Schütz, Carl Maria von Weber, Richard Wagner, Richard Strauss, Karl Böhm, Hans Vonk, Herbert Blomsdtedt, Giuseppe Sinopoli, Bernard Haitink and Fabio Luisi. Their current director, Christian Thielemann, is an extraordinary musician with a magnetic personality and an enormous capacity for work. He is most distinguished for his command of the Classical and Romantic repertoires, especially as a conductor of works by Be...ethoven and Wagner. The German soprano Julia Kleiter is equally at home on the opera stage as she is at concert performances, having appeared with such greats as Nikolaus Harnoncourt. Her main forte is the Mozartian repertoire and Classical and Baroque music in general, but audiences have also had the chance to hear her sing Wagner. The baritone soloist, the Austrian singer of Hungarian origin Adrian Eröd, who, although a member of the Wiener Staatsoper since 2001, has performed as a guest on many major opera stages around the world, from Hamburg and Milan to Houston and Tokyo. His work with Thielemann has included portraying Beckmesser at the Bayreuth Festival. At leading festivals and concert halls, he has collaborated with such conductors as Riccardo Muti, Nikolaus Harnoncourt, Sir Simon Rattle and Marek Janowski.

We regret to inform our esteemed audience that Adrian Eröd is replacing Christian Gerhaher.
Thank you for your understanding! 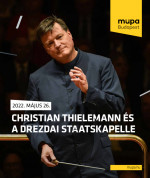 Change
We regret to inform our esteemed audience that Adrian Eröd is replacing Christian Gerhaher.
Thank you for your understanding!