Some of the best days of our lives come during the preparations for upcoming celebrations. Among the most magical of these is the build-up to Christmas, a period that transports all of us back to our childhood. How many times have you counted down the number of sleeps until the 24th (or 25th)? The finest example of the Christmas season in music is Bach's six-part cantata series, the Christmas Oratorio. On this occasion, we will hear the first three parts of the oratorio as interpreted by outstanding soloists, the French chamber choir Accentus founded in 1991, and the world-famous Insula Orchestra with its superb conductor, Laurence Equilbey.

Bach wrote the Christmas Oratorio, which consists of six cantatas, for the Christmas of 1734. Just as he did with so many of his other works, Bach used excerpts from previously composed pieces, including his secular cantatas. The first three cantatas will be performed at the concert: Jauchzet, frohlocket (Shout for joy), Und es waren Hirten in derselben Gegend (And there were shepherds in that very region) and Herrscher des Himmels, erhöre das Lallen (Ruler of heaven, hear our inarticulate speec...h). The cantatas were written for the first, second and third days of Christmas. The four singers for the concert, the Catalan soprano Nuria Rial, the German mezzo-soprano Corinna Scheurle, the German tenor Julian Prégardien and the also German baritone Samuel Hasselhorn, are all highly sought-after artists and international vocalists of the highest order. Now operating for 30 years, the Accentus chamber chorus has been the resident ensemble of the Rouen opera since 1998. Its name is associated with a Berio première and a tour conducted by Boulez. The Insula Orchestra was formed in 2012 on the Île Seguin in Paris, where it is the area's resident orchestra. Its repertoire extends from the Baroque to the Romantics, while it partners with the greatest singers and musicians of our time. The founder of the two orchestras is the celebrated French choirmistress and conductor French Laurence Equilbey. An outstanding female in her field, she has repeatedly demonstrated her ability at the head of her orchestras in concert and on highly acclaimed records. 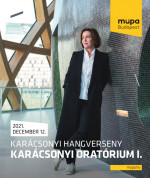