At the Müpa Budapest ticket offices you may also purchase tickets for this performance using Edenred Gift cards, as well as Edenred Silver, Gold and Platinum Gift cards. 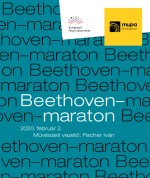