Everyone has to choose between Ravel and Debussy: whenever the question comes up of which is greater, or more popular, or more French, most people will take a side. There is no need for that here as we will get to enjoy the works of the two composers alternately over the course of an entire day.

Yet another occasion and opportunity to immerse ourselves in the worlds of two composers beyond the small fraction experienced in a single concert. This, the twelfth marathon to be jointly held by the Budapest Festival Orchestra and Müpa Budapest, is a celebration of the music of the unique pairing of Debussy and Ravel.
The names of the two French composers have become intertwined, with both of them entering the public consciousness as impressionists, in spite of the fact that neither of t...hem much liked this appellation. Rivals and mutual admirers, they observed, influenced and motivated each other.
Debussy was convinced he could not learn more from any other type of artist than a musician. What really sustained him and filled him with religious awe was the mystical wonder of nature. He was simultaneously the visionary creator of a new musical world functioning according to its own rules and the conservative guardian of French tradition. The bohemian Ravel once said, 'The only love affair I ever had was with music.' He drew inspiration from Spanish folklore and worked with Greek, Russian, Chinese, Hebrew, Austrian and Hungarian motifs, and also drew on American jazz. His music is lyrical and smart, thorough and determined.
This daydream of a marathon will release a great many sensual experiences, impressions, moods and colours: all we have to do is let them wash over us. 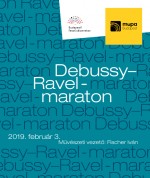