Beautiful voices, magical melodies and a plot full of twists and turns and exciting endings: this is the world of the bel canto operas that flourished early in the 19th century. The three greatest composers involved in creating that repertoire were Rossini, Bellini and Donizetti. Rossini is primarily appreciated for his comic operas, while the other two created many masterpieces of opera seria, the genre that developed as the descendant of serious opera, which included a number of pieces about historical subjects. The rare treat the Müpa Budapest audience will be hearing performed by a cast of international stars on this evening is one of these: Lucrezia Borgia.

On the topic of operas inspired by the dramas of Victor Hugo, Verdi's Rigoletto and Ernani are most frequently mentioned. It was the great French poet and writer's 1833 play Lucrèce Borgia, though, that Donizetti, a great figure of the bel canto era, used as a basis for writing his opera Lucrezia Borgia, which received its première in the same year that Hugo's drama itself was first staged. Brimming with secrets and surprises, the plot evolves over the course of a prologue and two acts. Th...e title role on the evening of the première will be sung as a stand-in by the young Russian soprano Lidia Fridman, who recently demonstrated to great acclaim at the Donizetti Festival in Bergamo just how at home she is in the world of bel canto. For the second performance, we can marvel at the artistry of the Spanish Yolanda Auyanet, who has already interpreted the roles of many of the great opera heroines in Europe's most distinguished opera houses. Taking the stage in the role of the young Venetian nobleman Gennaro will be the Romanian tenor Stefan Pop, an authentic bel canto specialist who won Plácido Domingo's 2010 Operalia competition. They will be joined in the main roles by the internationally acclaimed Hungarian bass Gábor Bretz and the Italian mezzo-soprano Cecilia Molinari. On the conductor's podium, we will have a familiar guest at Müpa Budapest in the form of a specialist in bel canto opera who regularly accompanies Edita Gruberova: Andriy Yurkevych.

The performance is a cooproduction of Müpa Budapest, Pannon Philharmonic and Zsolnay Heritage Managment Ltd. 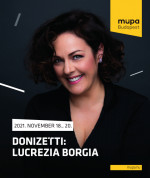