A special feature of Müpa Budapest's Christmas organ concerts is that the sound of the queen of instruments is joined by a human voice: not just keyboard music, but also gems from the vocal repertoire - pieces in harmony with the mood of the upcoming holiday. The central performer of this year's Christmas Organ Concert is a prominent member of the Hungarian organist community, and the ensemble that joins her is an excellent Hungarian workshop of early music that has been performing on stage for several decades.

Dóra Pétery was a student of István Ruppert and János Pálúr at the Liszt Academy in Budapest and Miklós Spányi at the Sibelius Academy in Helsinki. Between 2006 and 2008, she honed her skills in Sweden in Hans-Ola Ericsson's class. As a regular performer at numerous international festivals, she also enjoys playing contemporary music. The Baroque chamber ensemble Aura Musicale was founded in 1995, led by the globetrotting cellist Balázs Máté, a graduate of the Liszt Academy and the Royal Conserva...tory of The Hague, who also attended Nikolaus Harnoncourt's classes at the Mozarteum in Salzburg. The soloists performing the cantatas are promising young soloists who will not be unfamiliar to the Hungarian audience. Cypriot coloratura soprano Theodora Raftis, who counts Budapest's Liszt Academy among the institutions she has studied at, is the winner of many international competitions and is as comfortable with the Baroque repertoire as she is in the world of musicals. Connected in educational terms to the city of Lyon, French baritone Romain Bockler also performed at Hungary's Armel Opera Competition during his successful international competition showings. Furthermore, he has had the chance to work with Péter Eötvös and leads his own Renaissance music ensemble, Dulces Exuviae. The concert program is extremely diverse in terms of both style and genre. The Danish-German composer Dietrich Buxtehude's Prelude represents the Northern German branch of mature Baroque music, while Charles-Marie Widor's Symphonie gothique, simultaneously modern and archaic, represents the French fin de siècle. In the second part and between Bach's two chamber cantatas, Concerto Pastorale by the little-known German Baroque master Johann Christoph Pez will create a real Christmas atmosphere. 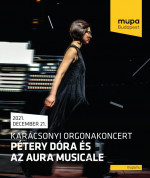