It's not easy to imagine a musical work that is more integrally linked to the celebration of All Saints' Day and All Souls' Day on 1 and 2 November than the 35-year-old Dvořák's Stabat Mater. Nor is it easy to imagine one that expresses its creator's personal feelings more faithfully than this rarely heard and unjustly neglected composition.

"I firmly believe and profess that all true art manifests itself through the impressions taken from the outer world - under the influence of the 'experience'.” Although this well-known quote is from Bartók, it is also relevant here in connection to Dvořák. It was not in answer to a professional commission or out of obedience to some abstract artistic need that he wrote the first church music of his life, dealing with the suffering of the "mater dolorosa”, the Mother of Sorrows, as she beho...lds the agonising death of her son on the cross. Instead, it was an expression of his own most personal anguish after burying his daughter Josefa in 1876. Other work forced him to put aside the work, and he only returned to developing and scoring it after life struck him another blow with the loss of two more of his children. The ten-movement Stabat Mater, a tragic and dramatic work of great power, speaks to us in a different voice than his secular works depicting scenes from the cheerful world of folk-life and moments of sensual beauty. This style is just as expressive, although clearly more sombre and severe, as that of is his later Requiem.
Riccardo Frizza, the conductor at the helm of the Hungarian Radio Music Ensembles, is already familiar to the Müpa Budapest audience from both Metropolitan Opera transmissions and the highly acclaimed performance of Bellini's opera I puritani that he conducted in the Béla Bartók National Concert Hall in May 2017. 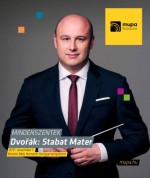