The Hungarian Radio Symphony Orchestra and Choir will furnish us with a long-overdue performance of The Dream of Gerontius, a major work from the English late-Romantic composer Edward Elgar - though rarely played in Hungary, it is one of the most important compositions of the early 20th century. It is no coincidence that the composition will be performed on All Saints' Day, as the piece is an adaptation of a poem by John Henry Newman that describes the path of the soul of a believer, from his deathbed to God's judgement and purgatory.

Elgar belonged to the Catholic minority in Anglican Great Britain, and created the oratorio from the words of an author who went from being an Anglican pastor to a Catholic bishop. The two-part work, which is 95 minutes in length and was composed for three soloists, choir and orchestra, is a true gem of the late-Romantic era. It slowly gained recognition in its own time before becoming a permanent part of the English national repertoire. It is most often performed and recorded within the confine...s of British musical life, which is why this is an exceptional opportunity for Hungarian audiences to enrich our inherent understanding of works that deal with loss and self-examination of the soul. Of the soloists, the tenor Andrew Staples is a well-known British opera singer, Hungarian Dorottya Láng is an old favourite of Müpa audiences who has found great success abroad, while the baritone James Rutherford first won Müpa hearts in his superb depiction of Hans Sachs in the Wagner Days performance of Die Meistersinger von Nürnberg. The German conductor Markus Stenz, a former student of Bernstein and Ozawa, is a renowned specialist of unique and contemporary works, and conducted the world première of György Kurtág's opera Fin de partie in 2018 at Milan's La Scala.

change
Please note that by buying tickets you are accepting the house rules at Müpa Budapest, which also include the latest regulations and security rules. You can read further details and find key information on this page. 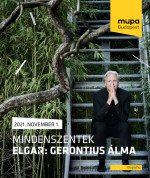 Elgar: The Dream of Gerontius Details