The young Hungarian soprano who became an international star a few years ago and soon went on to collaborate on a number of recordings and concerts with one of the celebrated countertenors of our time. And now they will be giving a joint concert at Müpa Budapest's Early Music Festival - with the latter appearing this time on the conductor's podium. Joining them will be an international early music ensemble that has won international acclaim over the two decades of its existence: with the French singer/conductor himself a member, it took its name from the Persian hero at the centre of a libretto - one that was set to music in 90 different surviving versions - written by the great Baroque poet Pietro Metastasio. The programme features a selection from the inexhaustible oeuvre of their collective favourite, Handel.

George Frideric Handel's musical output is always relevant, never tiresome, and invariably enriches the spirit with content that is eternally valid. Featuring arias and duets from six of Handel's operas, the programme will naturally be coloured and segmented by orchestral pieces as well. Born in 1985, Emőke Baráth studied under Júlia Pászthy at Budapest's Liszt Academy before honing her skills at the Conservatorio Luigi Cherubini in Florence with Leonardo de Risi. She also attended a numbe...r of master classes, including with such artists as Barbara Bonney, Kiri Te Kanawa, Nancy Argenta and Deborah York. Following triumphs at various competitions, her international career took off like a rocket. French countertenor Philippe Jaroussky is one of the greatest star singers of our time, an exceptional figure in the world of historically informed early music performance, both in concert halls and on the opera stage. Formed in 2002, Ensemble Artaserse has over the course of its first two decades presented numerous memorable productions, including of works by Cavalli, Monteverdi, Vivaldi and Handel, in collaboration with artists like Cecilia Bartoli and Andreas Scholl.

The concert will be preceded, at 6.00 pm, by an introductory presentation by János Mácsai entitled Prelude in the Glass Hall. The program will be open to anyone holding a ticket for the performance, but subject to prior registration on our website. 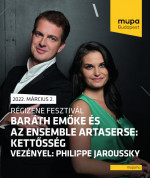