The two most representative genres of Handel's work are opera and oratorio. It is in these art forms that Handel was best able to endear himself to the audience, as vocals play a central role in each, and both create a path for the composer to stimulate feelings and passion, pain and joy, love and hate: to depict the fates of mankind. Still today, Partenope is one of Handel's most popular and most-played operas, and at this event we will hear it performed by one of the most significant early music orchestras of our times.

Partenope was premiered at the King's Theatre in London in February 1730. Though it follows the structure and forms of an opera seria (the Baroque 'serious opera'), it contains plenty of humour and the music is light in texture, while the plot, which takes place in 7th century BC in Naples, obligingly offers up entertainment to the audience with ever-popular intrigues of a romantic and political nature, not to mention gender swapping: in the very first act, Princess Rosmira presents herself disg...uised as Prince Eurimene. Over the years William Christie, who was born in the US but has been a French citizen for half a century, has established himself as one of the greatest early music conductors in the world. As an artist, he is always inclined towards discovery and enjoys being a patron of various compositions and talented performers. His true place of work is Les Arts Florissants, formed in 1979, which supports Christie's dual goals and has premiered a string of incredible productions over the decades. As usual, the singers consist of carefully selected promising youngsters. In recent years, Portuguese soprano Ana Vieira Leite, British countertenor Hugh Cutting and Spanish countertenor Alberto Miguélez Rouco, British mezzo-soprano Helen Carlston and the other performers have all demonstrated their undoubted quality. 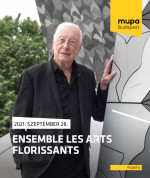