From time to time in the history of music, a composition that was at first disliked by audiences later became very popular. It is an even rarer phenomenon, however, when the reason for the piece's eventual popularity also formed the basis for its earlier rejection.

George Frideric Handel composed the biblical oratorio Israel in Egypt in the autumn of 1738, while the text was compiled by Charles Jennens, the librettist of Messiah. The audience reacted negatively to the piece's 1739 première at the King's Theatre in London, probably because they were not accustomed to choral parts that were as long and prominent. Handel's creation, however, was to become exceptionally popular in the 19th century, which, according to historians, was due precisely to the... choir's leading role. What are we to make of this? Was Handel, a Baroque composer, ahead of his time, and did he envision something about the monumental demands of audiences of the Romantic period?
With this oratorio, Müpa Budapest is offering a truly international production. Soloists include the soprano Hannah Morrison, born in the Netherlands, the German male alto Benno Schachtner and Polish tenor Krystian Adam. The orchestra, choir and conductor are all part of the Collegium 1704 ensemble founded in 1991 by Czech conductor, harpsichordist and horn player Václav Luks, along with his compatriots. Luks earlier earned valuable experience during his time as a horn soloist in the Akademie für Alte Musik Berlin. Collegium 1704 specialises in Baroque music, especially the works of Bach, Handel and Czech composer Zelenka. They will therefore be on familiar ground when performing Israel in Egypt.

The concert will be preceded, at 6.30 pm, by an introductory presentation by János Mácsai entitled Prelude, which will be open to anyone holding a ticket for the performance. 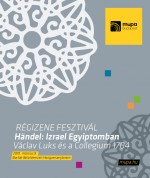