In our era of globalisation when travel is incomparably easier and faster than ever before, we've entered a golden age of international orchestras with hand-picked musicians. We know of a few such orchestras, each one as outstanding as the next. Among them is an orchestra that performed at the Müpa Budapest Early Music Festival, and which only a couple of years ago had a different name.

At its beginning, it was known as the Austro-Hungarian Haydn Orchestra, a group formed by Ádám Fischer in 1987 of musicians from both nations with the aim of uniting the two great musical traditions, and of serving the oeuvre of the composer which both peoples rightly feel to be their own. After 28 successful years, Fischer handed control of the orchestra to the French-German cellist Nicholas Altstaedt, born in 1982, who has led the orchestra since the 2015/16 season when he changed its na...me to the Haydn Philharmonie. Meanwhile, the previous team of Austrian-Hungarian musicians became an international ensemble.
'Joseph Haydn and his milieu: forebears and followers' is how the orchestra's Budapest performance programme could be described. Gregor Joseph Werner, composer of the concert-opening Three Fugues, was born nearly four decades before Haydn, and was his predecessor in the court of the Esterházy family. Ignaz Pleyel began his studies as a pupil of Haydn in 1772 in Eisenstadt (Brahms's Variations on a Theme by Haydn presumably takes its basic melody from one of his compositions). The programme is further embellished by Nicholas Altstaedt taking the stage not only as a conductor, but also as soloist for Haydn's extremely popular Cello Concerto No. 1 in C Major.

The concert will be preceded, at 6 pm, by an introductory presentation by Gergely Fazekas entitled Prelude in the Auditorium, which will be open to anyone holding a ticket for the performance. 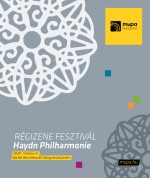