One of Müpa Budapest's loveliest traditions is the Haydn concert ringing in New Year's Day, which usually features the composer's majestic musical depiction of the world. Among the performers, the conductor is the only permanent fixture in these concerts, thus giving the audience the chance to discover new aspects of the work each time.

Ádám Fischer truly works hard to ensure that no two performances of The Creation will be the same. Different singers, different orchestras, different choruses: comparing his different readings in the past successive years, one would be justified in feeling that Joseph Haydn's sprawling fresco of genesis is worthy of the unrepeatable richness of the earth itself, as there is always some new angle that merits attention to discover in it, things that lead one to say, 'I never noticed that bef...ore.'
This occasion looks exceptionally promising: the chorus will be the Purcell Choir formed by György Vashegyi in 1990 - which means it will be celebrating the 30th anniversary of its foundation. The orchestra will be Concentus Musicus Wien. Formerly conducted by the late Nikolaus Harnoncourt, this ensemble made music history with the role it took on during the golden age of historically informed music performance. It is not just this encounter between two ensembles - one Hungarian and the other foreign - playing early music that promises to be interesting. It is also the fact that Fischer will thus have the opportunity to conduct a completely authentic version of The Creation!
Joining Thomas E. Bauer, a German baritone with an extremely broad repertoire on the stage will be two Hungarian singers: Emőke Baráth and Dávid Szigetvári have each enjoyed triumphs both at home in Hungary and abroad. 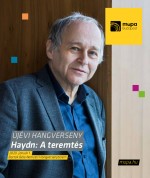