If they hear the name Kanneh-Mason, most people are likely to think of Sheku, the highly successful young British cellist. However, Sheku's younger sister Isata has also risen to prominence since the release of her debut album in 2019, on which she performed the works of Clara Wieck, Robert Schumann's wife. Now, the young pianist will perform a concert for the Müpa Budapest audience as part of the European Concert Hall Organisation (ECHO)'s Rising Stars Festival, which showcases talented young musicians.

Isata belongs to the Kanneh-Mason family, one of the most famous musical families in England. Isata is one of seven children born to Kadiatu Kanneh, from Sierra Leone, and Stuart Mason, who was born in London. Isata, Braimah, Sheku, Konya, Jeneba, Aminata and Mariata grew up in Nottingham, and each of them played either the violin, cello or piano. Performing as a group, the family became famous throughout the UK, starring in various TV shows, talent shows and documentaries. As time moved o...n, however, the siblings began to work on their solo careers: Sheku has become a renowned cellist, while Isata is a promising pianist. Isata regularly performs solo concerts and interprets solos from concerto works, though she has also continued to play chamber music alongside her siblings. Recent successes and plans for the near future include venues such as the Edinburgh Festival, Wigmore Hall in London, the Théâtre des Champs Elysées in Paris, the Teatro della Pergola in Florence, and an extensive North American tour of ten cities, including New York, where Isata will perform in front of an audience at Carnegie Hall. At Müpa Budapest, the young artist will demonstrate her versatility in terms of style and genre by interpreting a sonata by Mozart, etudes from Rachmaninoff and a ballade of Chopin's, while the author of the evening's indispensable contemporary work is the Jamaican-born composer Eleanor Alberga.

Nominated for the Rising Stars programme by: Birmingham THSH.

The new work being given its world première was commissioned by Barbican Centre London in collaboration with B:Music and ECHO. 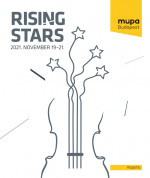