A night with Dvořák: Slavic melodiousness, the unmistakable harmonic twists that count, so to speak, as the composer's trademark, and his own mix of emotions and passions. Two works that are among the biggest favourites in the symphonic literature, with two extraordinary musicians representing two different generations - this is what this evening promises.

If there exists a foreign conductor who can be regarded as an honorary Hungarian, Ken-Ichiro Kobayashi (born in 1940) is surely the one. The Japanese maestro achieved an overwhelming victory at Hungarian Television's First International Conducting Competition in 1974 and became, as if by magic, a beloved favourite of the Hungarian audience. Fans of his conducting have remained unfalteringly loyal ever since: no matter how many times he returns to this country, they always pack the concert ...hall to the rafters.
István Várdai was not even alive yet at the time of Kobayashi's initial Budapest triumphs, having been born 11 years later, in 1985. In spite of his youth, he is today one of the world's most celebrated cellists, and one whom everybody is glad to have as a partner, whether in performing a concerto or chamber music. Várdai is certain to find a common voice with Kobayashi as well, since the language of music is not only an international one, it also connects different generations. As for Dvořák's Cello Concerto, it suffices for us to say that many people consider it to be the most important of all concertos written for the instrument. Brahms, the Czech composer's great mentor, once sighed, "If I had known that it was possible to compose such a concerto for the cello, I would have tried it myself!”
The Symphony No. 8, dating from 1889, is the only one of the composer's symphonies to escape from under the enormous shadow of the New World Symphony: this sensually scored work is full of charm, grace, lightness and nostalgia - without dispensing with either power or determination. 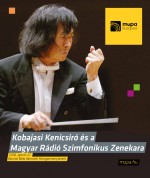