A Saint-Saëns piano concerto, Sándor Veress's rarely heard Violin Concerto and two young instrumental soloists. The second half will consist of a quite impressive symphonic composition, whose organ solo part will be performed by a musician who is not only an organist, but also an outstanding conductor. There will be plenty to discover at this concert featuring Imre Kollár and the Kodály Philharmonic along with Gergő Zoltán Varga, Éva Osztrosits and Dániel Somogyi-Tóth!

"It starts with Bach and ends with Offenbach"- this is how one contemporary assessed the capricious changes in style in Saint-Saëns' Piano Concerto No. 2 in G minor. The soloist playing the work, Gergő Zoltán Varga, completed the Liszt Academy's piano performance and pedagogy course with honours in 2015. He has achieved successful results at competitions both in Hungary and abroad and taken the stage in numerous concert halls across Europe and Asia. Sándor Veress was a student of Kodály's ...and Bartók's. His style, built on foundations of folk music, would later also be influenced by twelve-tone serialism in the second half of his life after he emigrated from Hungary in 1949 in order to settle in Switzerland. He wrote his Violin Concerto in 1939 and revised it in 1948. Performing the solo part will be Éva Osztrosits, who like Varga is a graduate of Budapest's Liszt Academy. She is a veteran of many festivals, playing along such partners as Vilde Frang, Nicolas Altstaedt, Maxim Rysanov and Ilya Gringolts. Dániel Somogyi-Tóth, who will be featured in the Saint-Saëns Organ Symphony, is both a conductor and an organist; he studied under Tamás Gál, András Ligeti and Gábor Lehotka. Imre Kollár, the first prize winner at the 1994 Treviso International Conducting Competition, served as the artistic director of the Kodály Philharmonic Debrecen, which has been active since 1923, between 1995 and 2008. 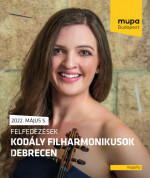