The overture to Schumann's sole - and to this day, rarely played - opera, the 'elder sibling' of Sibelius's highly popular Second Symphony, a young Chinese-German pianist who justifies the high hopes placed in him and a Hungarian conductor on the cusp of his career: this concert offers many different things to discover and much of them.

Gábor Hontvári studied at Budapest's Franz Liszt Academy of Music, qualifying as a conductor after studying under András Ligeti, Ádám Medveczky and Valér Jobbágy. Since 2015 he has been studying at Weimar's University of Music Franz Liszt, in a course led by Nicolás Pasquet and Gunter Kahlert. In 2014, he won first prize and the audience prize at the Rezső Lantos Choir Conducting Competition, and the next year went on to take second place and the audience prize at the Seventh Central Germ...an Colleges Conducting Competition. He took another second place and audience prize this year at Campus Dirigieren. Since the 2019/20 season, Hontvári has served as the first conductor and deputy music director at Würzburg's Mainfranken Theater.
Founded in 1945, the MÁV Symphony Orchestra has over the course of its history played under such conductors as Tibor Szőke, Miklós Lukács, Géza Oberfrank, Tamás Gál and Gábor Takács-Nagy. Currently under the direction of Daniel Boico, the ensemble is enjoying the most successful - and in terms of its artistic development, the most forward-looking - period in its history. 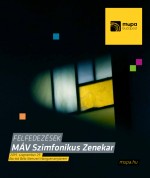