The Munich-born tenor who is celebrating his 50th birthday in 2019 is considered one of the most outstanding opera and art song singers of our time. His versatility and flexibility are well known: he speaks the languages of Schubert and Beethoven, as well as of Verdi, Wagner, Massenet, Richard Strauss and Puccini. So why wouldn't he also have a close relationship with the Viennese sense of life that is encapsulated in the works of the city's operetta composers? The Müpa Budapest audience will be delighted to find that the most authentic portrayers of the atmosphere of the Austrian capital include some world-famous Hungarian artists.

Following several song recitals, this concert will mark Jonas Kaufmann's third visit to Müpa Budapest. What this concert will evoke is the spirit and grace of Vienna and the style of living, delirious with joy, exuded by the city's atmosphere, with excerpts from such works as Eine Nacht in Venedig ('A Night in Venice'), Die Fledermaus ('The Bat'), Wiener Blut ('Viennese Blood'), Die Zirkusprinzessin ('The Circus Princess') and Die lustige Witwe ('The Merry Widow'). The works of Strauss, St...olz, Kálmán, Lehár and Sieczyński, intoxication and elegance, love and nostalgia, all narrated in music - this is what this concert promises. And playing a key role among its various musical devices will be the swinging sounds of dance tunes: in particular the heady triple-beat of the waltz, but with polkas and marches also thrown into the mix. The opera singer is bringing partners of an international calibre with him: taking the stage to sing both duets with him and solo numbers from her similarly broad repertoire will be the young American soprano Rachel Willis-Sørensen, while the outstanding PKF - Prague Philharmonia will be conducted by his countryman and frequent partner Jochen Rieder, a musician belonging to the same generation as Kaufmann himself. 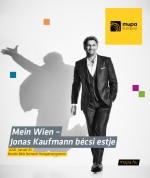