We welcome a sensationally young performer to this evening with the Miskolc Symphony Orchestra. Not long ago, Mihály Berecz was dazzling audiences as a wunderkind, but we may soon come to regard him as a fully matured artist. Although he only turns 18 a little over a week after this concert, Berecz has already performed as a soloist with numerous Hungarian orchestras, taking the stage with Zoltán Kocsis among others. The evening's programme features some constant fixtures of the classical repert...oire, beginning with an overture by Rossini which, though written for a serious opera, is surprisingly bright and stirring in mood. Beethoven's piano concerto typical of his heroic period follows, before the evening concludes with a masterpiece by Brahms which took over two decades to complete as the composer struggled to emerge from Beethoven's shadow, and which guides the listener from darkness into the light. Orchestra and conductor enjoy a relationship stretching back many decades, although this only became closer in the summer of 2014 when Tamás Gál became artistic director of the Miskolc ensemble, which has functioned as a professional orchestra since 1963. As an industrious member of the Hungarian musical scene, Gál has many highly successful performances to his name, earning the enthusiastic acclaim of Hungarian audiences on numerous occasions with his mature and stripped-down productions, worked out down to the tiniest detail but nevertheless filled with emotional spontaneity. 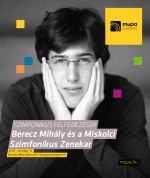