Combining light and catchy melodies written with operatic exigency with stories interwoven with humour and always revolving around the central theme of love, Viennese operetta took on its presently known form, buttressed with the overwhelmingly popular figures of the dancing comic and the soubrette, in part thanks to the work of Hungarian composers. This operetta gala, something of a novelty at Müpa Budapest, brings world stars of the opera stage - in the form of Annette Dasch, Piotr Becza...ła and Thomas Hampson - to delight the audience with classic tunes by the most popular composers of operetta.
In the final third of the 19th century, Vienna was singing and carousing its way through its decades of crisis between two wars and two bankruptcies. A healthy relationship linked the convivial city, Europe's capital of music, to the Austrian village, the music of the palaces to the pubs of Grinzing. It also ensured a close bond between classical music and street serenades and the folk melodies flowing into the great metropolis. Operetta or ‘little opera' summed up this mélange of styles that quickly gained popularity with an audience receptive to stories with a bittersweet feel.
The cradle of the genre was Vienna, with the first successes coming in the form of Millöcker's Der Bettelstudent ("The Beggar Student”) and Gräfin Dubarry ("Countess Dubarry”). Then came the appearance of the ‘Waltz King', Johann Strauss Jr, who brought down the house with Der Zigeunerbaron ("The Gypsy Baron”) and Die Fledermaus ("The Bat”). Also considered outstanding composers of the ‘golden age' were Robert Stolz and Karl Zeller.
Operetta also attaches Hungarian names to this brilliant new era: those of Ferenc (Franz) Lehár and Imre (Emmerich) Kálmán. Lehár's Die lustige Witwe ("The Merry Widow”) provided Broadway with an entirely new theatrical concept. His Giuditta was received with thundering applause, with its 1934 première broadcast on the radio from - something that had been previously been practically unthinkable - the Wiener Staatsoper, whose director at the time, Clemens Krauss, included an operetta in the programme each year.
An incredible melodic richness and unbelievable skill with an extremely diverse range of styles were perhaps what differentiated Imre Kálmán, the ‘King of Operetta', from his contemporaries. His most frequently performed work is Die Csárdásfürstin ("The Csárdás Princess”), originally titled "Long Live Love”, while his most exciting and beloved work is Gräfin Mariza ("Countess Maritza”), with its gorgeous solos, intoxicating duets, exhilarating dances and a spectacular revue depicting the world of genuine Hungarian revelry. It includes the famous song Wenn es Abend wird - Grüß mir mein Wien aus, which is translated into English as "Vienna Mine” and into Hungarian, with some bias, as "Tell the women of Budapest that I adore them”. 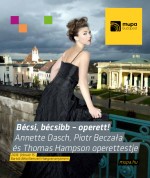