In their next subscription concert, György Vashegyi and his two ensembles, the Purcell Choir and Orfeo Orchestra, will once again delight visitors with their familiar brand of musical rarities. In addition to Mozart's motet Sancta Maria and his timeless Requiem, the audience will get to hear the modern world premières of two pieces with connections to Hungary: Johann Georg Albrechtsberger's Holy Week responsory Domine, secundum actum meum and Gregor Joseph Werner's Requiem in C minor.

The composer of one of the two works originating from the enormous collection of unprocessed manuscript scores from the Esterházy collection kept at Budapest's National Széchenyi Library is Johann Georg Albrechtsberger. As a renowned organist and music teacher of his era, he worked at the Ursuline Church in Győr for two years and later went on to spend a significant part of his life in Vienna, working in the court of Emperor Joseph II and, from 1792 until his death, as the kapellmeister at Saint... Stephen's Cathedral. The concert will feature a performance of his Holy Week responsory Domine, secundum actum meum. The other infrequently played composer to be included tonight is Gregor Joseph Werner, who through the long final phase of his life served as the conductor of the Esterházy court orchestra, directly preceding Joseph Haydn in the position. Vashegyi's ensembles presented Werner's oratorio Der gute Hirt in the grand hall of the Franz Liszt Academy of Music on 8 January 2019, and this time around it will be his Requiem in C minor from 1763 that the Müpa Budapest will get to hear. Although the work is smaller in scale than Mozart's Requiem, it will serve as a worthy match to it at this concert. The work is modern in its outlook, attesting to the composer's great mastery of counterpoint. The modern scores for these two pieces receiving their modern premières were created from the original manuscripts by Purcell Choir member Ágnes Pintér.

Tickets purchased for 28 January are also valid for this concert. 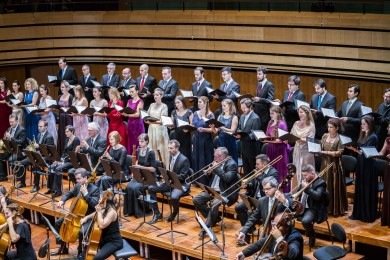