One important feature of Müpa Budapest's organ evenings is that they don't preserve tradition simply by recycling the same repertoire. They renew themselves, both through the development of the programme and the pairing of the organ with other instruments. On this special evening, we will hear primarily American and English music spiced up through the use of percussion instruments.

Like some poems, the concert will follow a 'frame narrative'. A very popular works will be performed at the beginning and end of the programme. The first will be the 1942 patriotic wartime piece Fanfare for the Common Man by American composer Aaron Copland (1900-1990) - one of the most popular works of the 20th century. The closing piece will be the movements Mars, Venus and Jupiter from the orchestral suite The Planets by English composer Gustav Holst (1874-1934). It is worth noting that ...Pluto, another movement from the concert, was not written by Holst but by Stephen Eddins (1954) at the request of Clive Driskill-Smith and Joseph Gramley, and is therefore a supplemental addition to Holst's suite by the two musicians. Both Copland and Holst's creations were originally orchestral works, or rather Copland's fanfare was originally written for a brass and percussion ensemble, but Saint-Saëns arranged the movements of Le carnaval des animeaux for two pianos and a chamber ensemble.
Clive Driskill-Smith (1978) is an English organist. He studied at Eton College and Winchester College before becoming Sub-Organist at Christ Church in Oxford. He has contributed to concerts and recordings by the Christ Church Cathedral Choir, and has joined them on tours. Organized Rhythm is not the name of today's concert, but rather that of the permanent duo comprised of Clive Driskill-Smith and American percussionist Joseph Gramley, born in 1970. In addition to his participation in Organized Rhythm, Gramley is active as a soloist, teacher and composer, and is a member of the Silk Road Ensemble. 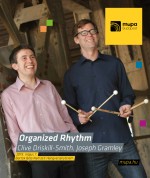