Some masterpieces exert their influence on posterity in a general sense, and there also exist unique compositions that, above and beyond this widespread impact, specifically inspire the work of a later artist. Such was the case with Bartók's one-act opera with respect to the composer of Senza sangue.

One of the most successful opera composers of our time, Péter Eötvös based his most recent opera on the internationally renowned Italian writer Alessandro Baricco's novella Without Blood, composing it to a libretto written by his wife and collaborator Mari Mezei. The story follows an adult woman who encounters the man who, when she was a child during the Spanish Civil War, murdered her family before her eyes. The purpose of the confrontation is not revenge, but the search for forgiveness a...nd redemption. Eötvös consciously intended for the work to be paired with Bartók's mystery play Bluebeard's Castle: both chamber dramas provide a glimpse into the secrets of two souls, one a woman's, the other of a man. Eötvös also developed the orchestral score to use the same configuration (with the exception of adding in an organ) as Bartók's opera.
This performance at Müpa Budapest makes the composer's dream into a reality: staging Senza sangue together with its inspiration and predecessor, Bluebeard's Castle. The twinned works are both being directed by Csaba Káel and conducted by Eötvös himself, who said of his own opera, "I started working on it like a film director who wants to shoot his next film in black and white. In my previous operas, I was after a colourful sound, but this one is different in that I'm seeking sharp contrasts and shades of black, grey and white.” 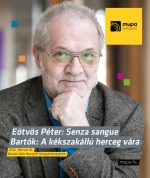