'Freedom and love! These are the two things I need. For my love, I would sacrifice life, and for freedom, I would sacrifice my love.' These verses by Sándor Petőfi could also be read as a summary of Puccini's opera. A struggle for freedom and love incorporating passion, purity, courage and self-sacrifice - this is the core of the plot of Tosca, a tragedy famous for its masterful dramaturgy, density and power. Now comes a chance to see one of the most popular masterpieces in the operatic literature in a concert-version performance featuring international stars.

Taking the stage at Müpa Budapest in the title role will be an artist of no lesser calibre than Anna Netrebko, a Russian-born citizen of Austria and one of the most popular sopranos of our era. Over the years, critics have described her in entirely superlative terms, and the steep ascent of her career arc is marked by a series of legendary portrayals. Depicting the freedom fighter and revolutionary-minded painter Cavarodossi will be Netrebko's husband, the Azerbaijani tenor Yusif Eyvazov. Ever s...ince they wed in 2015, this dream couple of the opera world have appeared together in many joint productions for their fans. The part of the simultaneously bloodthirsty and lovelorn chief of police, the unbridled Scarpia, will be sung by Elchin Azizov, himself an international star. Another Azeri, his splendid voice makes him a power at Moscow's Bolshoi Theatre. The maestro conducting the Hungarian State Opera Orchestra and Chorus hails from the composer's homeland of Italy: Jader Bignamini currently serves as resident conductor of Milan's La Verdi Symphony Orchestra and as music director of the Detroit Symphony Orchestra. A former protégé of Riccardo Chailly's, he has earned applause from audiences in numerous major opera houses, from the Arena di Verona to the New York Metropolitan Opera. In the minor roles will be such superb artists as the marvellous Péter Kálmán, a memorable Alberich from the Budapest Wagner Days festival, who will sing the part of the Sacristan. 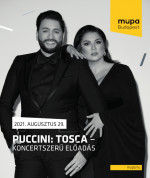