This concert promises a whole series of discoveries! We will get know a young Hungarian conductor who is also a composer. He will conduct one of his own works, a prize-winner at the Müpa Budapest Music Competition. The Spanish soloist for the Saint-Saëns cello concerto is just 17 years old, but has been giving concerts and winning international competitions for years. Chopin's Piano Concerto in E minor will see a young Hungarian pianist take to the stage who has had a connection to music since she was in the womb. She learned to read at two, and picked up sheet music shortly afterwards.

The composition entitled String Zing to be heard here earned the admiration of the judges in the chamber music and chamber symphony category of the Müpa Budapest Music Competition, with Kornél Thomas also winning an award in the solo and chamber music category. He has worked as assistant conductor at the Savaria Symphony Orchestra since the 2017/2018 season, and will lead the same orchestra through his own work here in concert. The two concertos on the programme are the Cello Concerto in A... minor by Camille Saint-Saëns and Chopin's Piano Concerto in E minor, neither of which need discovering as they are both part of the core repertoire. Instead, we should turn our attention to the performers of the two works, both of whom are just starting their careers. Luis Aracama Alonso studied at the Reina Sofía School of Music in Madrid and has attended masterclasses by a host of outstanding artists, among them Márta Gulyás, Gautier Capuçon, Torleif Théeden, Alexander Lonquich and Enrico Dindo. The soloist for the Chopin piano concerto, Monika Ruth Vida, was born in Budapest in 1996 and studied under Gábor Eckhardt at the Academy of Music's Exceptional Young Talents Class. She has placed in a number of national and international competitions, and received the Junior Prima Award in 2020. 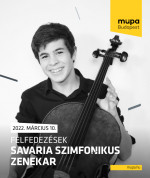